The Tees Transporter in Poetry 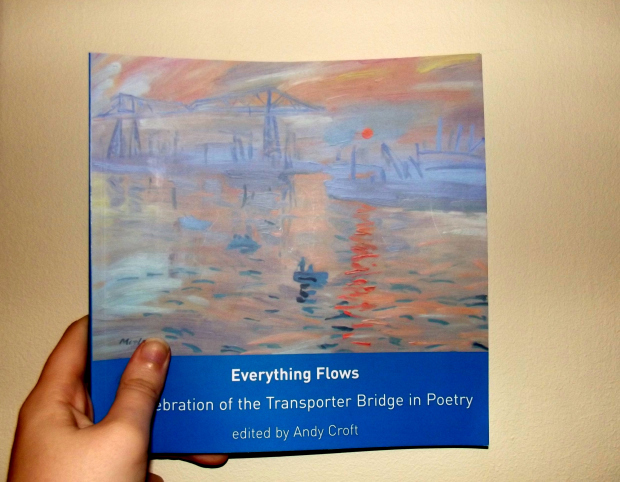 In case you haven’t noticed, I have a somewhat curious obsession with bridges, particularly bridges on the Tees. After writing an article about a trip up one of the best-known bridges of the North East: The Transporter, I was approached by their events officer to host a seminar about the cultural importance of the bridge. During the preliminery meeting I was lucky enough to get my hands on a copy of a book that had been produced for the bridge’s centenary – Everything Flows: A Celebration of the Transporter Bridge in Poetry.

Expertly edited, this book delivers individually poignant poems and also works collectively as a weaving narrative – pulling together the threads of a complicated local history. Featuring both bold imagery and endearing colloquialisms, these compositions are a heady cocktail of memory, nostalgia and regional pride – but there’s no sugar coating here. Although there is ample reference to the Saturday afternoon football cheers reverberating from Riverside Stadium (situated a stone’s throw from the structure) the bridge’s unfortunate reputation as an iconic suicide spot is also sensitively explored.

For those unfamiliar with the bridge itself, it is one of the few remaining transporter bridges in the world and is one of the most prominent emblems of the Teesside skyline. By day it is an angular marvel, piercing the grey sky with its  steely geometry and at night it is a blue beacon in a swamp of yellow street lights. Its opening ceremony was conducted on the 17th October 1911 and since then it has taxied workers across the river Tees at Port Clarence.

The book offers a truly layered understanding of why this bridge is so deeply embedded in the identity of the North East and why the residents of the much-maligned towns of Middlesbrough and Stockton hold it in such high regard. The carefully-chosen words, written by members of the local community, are peppered with dreamy artistic interpretations of the bridge that are certain to delight. Plus, rhyming the word “daughter” and “Transporter” is bordering on Lilly Allen-esque lyrical genius – I’m sure you’ll agree.

Time to go and write my own lyrical ode to my favourite bridge methinks. Now, what rhymes with gondola…?

← Barnes Bridge
Much Ado About Nothing? →

One thought on “The Tees Transporter in Poetry”