The Girl on the Bridge: Millennium Bridge, London 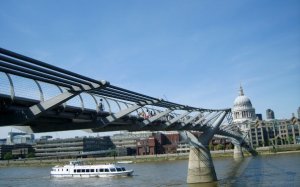 The Millennium Bridge in London is a striking representation of the barest bones of architecture: a steel skeletal suspension forging a connection not just between north and south London but between the progressive art of the Tate Modern and the beloved antiquity of St Paul’s Cathedral. It is beautifully bookended by these two notably contrasting structures and this rather rousing example of urban juxtaposition promotes the idea of the bridge being a link in the chain of history rather than a lowly conduit between the banks of the river.

With its sulky, grey exterior and its plainer-than-Jane concrete supports you probably won’t be surprised, at least on an aesthetic level, to learn that the bridge is actually the product of an architectural competition held by the Financial Times. At the time of its inception, back in 1996, it would be the first footbridge to be built across the Thames in over a century. Rather drab, some might say, for a century’s wait and yet somehow this wallflower of a bridge does possess a certain 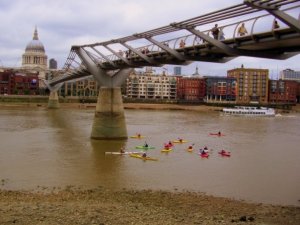 charm. Perhaps it’s the unavoidable sense of its unassuming nature. It stretches itself out with such humility between two cultural giants of architecture; barely a blip on the radar of the skyline along the river. Even the suspension cables, in contrast to international suspension favourites Brooklyn and Golden Gate, are unobtrusive. Stowing away below deck to ensure a clear view across the cityscape. The Millennium Bridge is undoubtedly a servant of the city rather than a frame for it.

I remember, four years ago, standing somewhat bewildered on this dias of the metropolis, looking out over the possibility before me: the beacon of the BT tower with its blue glow tinging the twilight, the trains rattling across the railway bridge into Waterloo and the hieroglyphs of Cleopatra’s Needle partially hidden by the serpentine curve of the river. I had just received a phone call confirming my first writing job in London and for the first time in as long as I could remember I had that most precious feeling of being in the right place at the right time.

Things didn’t necessarily turn out the way I thought they would for me in London, lending further weight to the tabloid argument that the bridge is in some way cursed, but to this day I have yet to cross the bridge without being reminded of the unparrallelled awe of that moment. The thrill and the fright over making my own way in the city re-injects itself into my bloodstream. My heart fills with marvel as I stand humbled by the intricate pillars and domes of St Paul’s Cathedral 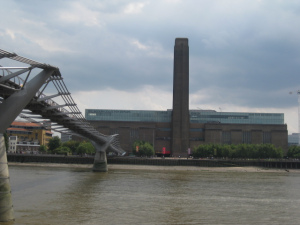 and I simultaneously extend a strange, sympathetic love to the block-head chimney of the old Bankside Power Station. It’s rather beautiful in its hulking ugliness and I’ve always been a sucker for the black sheep, the ugly duckling, the mongrel underdog that’s been in too many fights. Many might argue that the archtectural awkwardness of the power station, like the tall girl at school ever desperate to hunch, is preferable to the unremarkable anatomy of The Millennium Bridge but in my, admittedly wild, imaginings both while away their years casting longing looks at the classical beauty of St Paul’s and exalting in relief that neither of them are The Millennium Dome: a pre-school art project gone awry if ever there was one. I’m still convinced that it’s made of masacred egg boxes. Where else does all that recycling go?

← Postcards from Byland Abbey
Monotony and Monogamy: Half rhymes for a reason? →