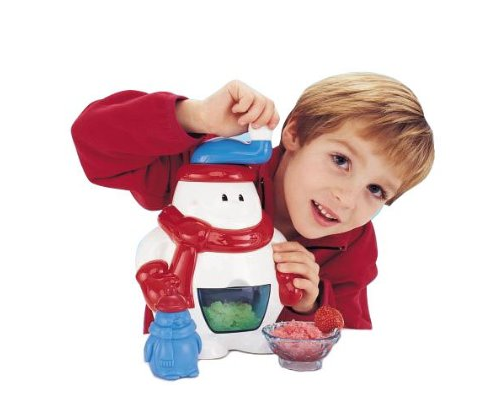 Let’s admit it here and now: when the original Mr Frosty trundled his way onto our TV screens and we saw big gangs of beaming youngsters enjoying the wonders of crushed ice and factory-made flavouring we wanted one more than anything in the world. We had no idea why our friends would be so impressed with a plastic cup of raspberry mush but we desperately wanted to find out.

Regrettably, the advertising hook must have been somewhat lacking as many a parent remained unwilling to dash down to Toys R Us and pick up a Mr Frosty for little Johnny. I was one of those underprivileged children ruthlessly denied a Mr Frosty – my mother very simply justifying her reluctance with the line: “You’ll only make a mess with it.” If only Hasbro knew that in their quest to provide children with sickly, saccharine slush they had unwittingly spurred a not-so-civil war between parent and child that would rage for decades .

I have regularly gone into great detail about the psychological trauma caused by this unique brand of Frosty fascism over half a pint of Fruli and a packet of Scampi Fries. The strange thing is that rather than receiving the usual ridicule for yet another bout of impromptu irrelevancy, my complaint is met, more often than not, with compassion, understanding and empathy. There were many casualties in this Cold-War-For-Kids; almost a whole generation had their hearts broken by lame excuses from poor parents unwilling to spend fifteen pounds on a lump of plastic that was only going to stain the cushions on their Mahogany dining suite.

Of course, on odd occasion, I do speak to someone who actually won their war through the execution of regular, loving protests (known more commonly as tantrums), subtly urging their parents to wave the white flag. These parents were evidently less-concerned by the 15% interest rates and imploding economy but that doesn’t make the victory over the monotonous, adult condition any less poignant. I listen with envy as these victors relay tales of satisfying their friends’ thirst for e numbers and crushed ice, the only draw back being that you apparently had to grind like a monkey for 20 minutes whilst your infantile guests watched on impatiently, rapping their plastic cups on the table. But once the ice was crushed, O Hosanna! The dreams of the MTV generation were finally realised and how they loved the sweet nectar of consumerism.

Not all Frosty fables had a fairytale ending, however, and in order to come to terms with the Cold-War-For-Kids I’m proposing one last revolution for child-kind everywhere. You see it occurred to me the other day (yes it has taken me 24 years) that I’m no longer six years old. I have an income and a debit card and access to the most comprehensive shopping channel mankind has ever known: the internet. A quick search revealed that Mr Frosty is still alive. He was not killed off by a parade of parental troops marching into toy shops across the country to complain about the damage to their sheepskin rug or how long it took them to get little Johnny off to sleep that night. Not only is Mr Frosty still available but he’s been updated (so no more monkey grinding) and is dispatched with myriad accessories including 3 lolly moulds, 2 sundae dishes, and a fruit juice dispenser (in the shape of a penguin).

The fact that they chose the penguin form to mould their juice dispenser really says it all as far as I’m concerned but I do understand, given you are no longer pre-teen, that the discerning reader may take a little bit more convincing. After all the years of suppressing your desire for ice crushed by a plastic snowman with frighteningly cheerful eyes it’s only natural for you to have detached yourself from the true depths of your feelings. Inviting your friends round for flavoured ice when you’re pushing 30 (or insert relevant societal milestone) may feel a little bit paltry but we now have access to something else that may prove a much bigger incentive to resurrect the Mr Frosty dream: alcohol! 80s-themed cocktail party ahoy!

Before you make your online purchase and start home-printing invitations in clashing colours, however, a little word to the wise: make sure you have a rota for crushing duties drawn up before the party ensues. Just because you’re old enough to buy your own Mr Frosty doesn’t mean you are too old to squabble over who goes next on one of the most sought after toys of all time.

← Confessions of a Hootaholic: All the better to tweet you with
A day in the life of a Windmill Hunter →