Confessions of a Hootaholic: All the better to tweet you with 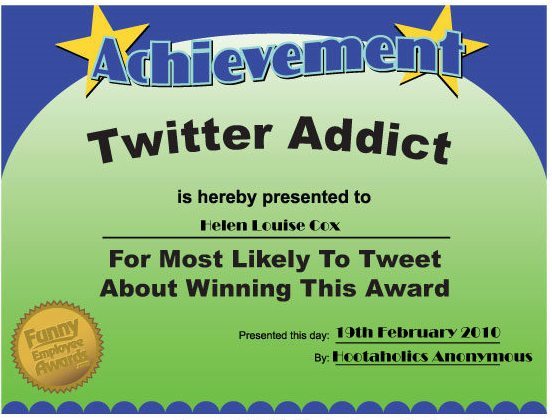 Hello, my name is Helen and I’m a Hootaholic…

I want you to know: I wasn’t always a Hootaholic. At first I only dabbled with the soft stuff: listing loves on Myspace, uploading photos on Facebook and blogging once a month or so as the mood took me. Then one day, quite unexpectedly, I stumbled upon Twitter: a voyeuristic, narcissistic, modernistic realm of round-the-clock status updates. Complete strangers could find you; follow you; love you. You could share anything: shoegasms, book lusts, film reviews, food cravings, dark secrets you forgot to write in your diary and absolutely any other random thought that you could conjure up from the blackened cauldron of your post-modern brain. It really was a brave new world.

At first a couple of hits a day was enough for me but over time my need grew and before I knew it I was jacking into my twitter feed every few hours for a fix. Tweeps followed me in their tens, and then in their hundreds; all of them unknowingly supporting my habit; assisting my addiction.

I came close to quitting once. I went cold turkey for weeks but then my boyfriend started a Twitter project for work and, well…I had to show my support right? I mean, there’s only one thing in this world worse than a Twitter addict and that’s a lousy girlfriend. So, out of a sense of deep devotion and duty, I followed his project and simultaneously kick-started my one-time kicked habit.

Even my family are struggling to cope with the strain of my addiction. My sister, @sheenac86, has threatened to block my retweets; unable to cope anymore with the burden of regularly-scheduled randomness. I know if I don’t stop I’m going to end up on an episode of Jeremy Kyle entitled “Sister, you’re a social networking self-harmer” with @sheenac86 and my mother in tow but there are so many cyber crumbs of coolness out there clamouring for commentary and desperate for distribution that the mere thought of being cut-off makes my hands shake.

Of late my compulsion has developed even darker depths. I’ve learnt how to text updates from my mobile and discovered a frightening phenomenon called Hoot Suite, an application that offers unparrallelled power in the Twitterverse. Through Hoot Suite you can shorten links, post pictures, view replys, create lists and, most cripplingly, schedule updates enabling perversely premeditated tweetage any time of the day or night.

So now you know my sick, sick secret. It’s too late for me; I’m too far gone and must now face a fate of my own making. Before you judge me as a sad, lost cause of a human being however just remember that some of the greatest minds of our time suffer from the same affliction: Stephen Fry, Simon Pegg, Eddie Izzard, Kevin Spacey and Lady Gaga to name but a few. It’s a small but significant consolation for me that even though I am horrifically hooked on living in a synthesised society I happen to be in the very best of company.

← Come Hither Cartoons: My search for the sexiest sketch
Mr Frosty: Coming to terms with the Cold-War-For-Kids →