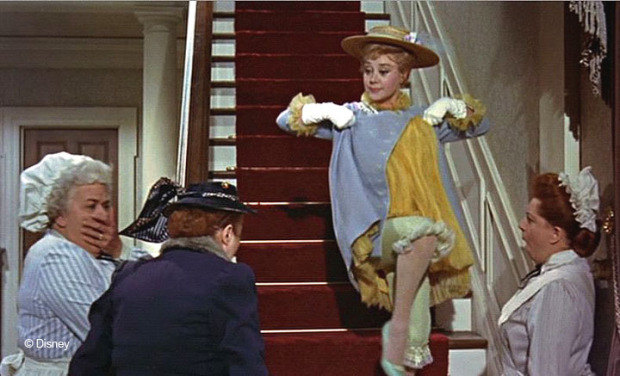 As a child I always remember feeling quite empowered when I watched Mary Poppins. I heartedly admired, and embarrassingly enough often mimicked, Mrs Banks prancing around the living room in Edwardian dress singing “Sister Suffragettes” at the top of her lungs. Having rewatched the film recently, however, I have come to see it in a different light as I more readily noticed, admittedly with a bit of a wry smile, the amount of simpering Winifred does around George whenever he enters their, immaculately presented, living room.

“Oh George! You didn’t jump in the river. How sensible of you.”

Going so far as to Google the subject I found a digitised tidal wave of blog articles, forum posts and general rants about the fact that in spite of the show of the “Sister Suffragettes” song the film actually promotes anti-feminist sentiment. Mrs Banks’s devotion to the suffragette charge is actually portrayed, according to the aforementioned digitised tidal wave, as the root cause of her neglecting her children. Ultimately the only remedy for this is for her to give up her engagement with equality symbolised, apparently, by the moment when she ties her suffragette sash to the children’s kite at the end of the film.

“You know how the cause infuriates Mr Banks”

Although many of the online articles about Mrs Banks cite the 1963 publication of “The Feminine Mystique” as an important morsel of context I’m finding it difficult in my own head to think of the 1964 Disney film as a significant cinematic backlash against the writings of Betty Friedan. Surely if this was the case there would be more openly submissive moments from Mary Poppins herself…and perhaps fewer tap dancing penguins?

Like just about everything in art, film, literature and life I guess the nature of the feminist underdones in Mary Poppins is down to personal interpretation. Yes! Mrs Banks’s simpering is unbecoming for a seemingly scrappy suffragette who hangs about with the likes of Emmeline Pankhurst but it’s also realistic to the period in which the film is set and the class to which the family are supposed to belong. I never interpreted her tying the sash to the kite as her giving up the suffragette cause but more as a realisation that there was a balance to be struck between her responsibilities to womankind and her responsibilities to her children. Plus Mr Banks is shown to be just as negligent of those dough-faced little tykes, if not more so, on account of his job in the city and has to make sacrifices in his standing there in order to better attune himself with his family. Doesn’t that count for anything?

Most of the down-with-Disney online reports like to highlight the fact that the author of the original books, P.L. Travers, was less than enamoured by the film version and she was particularly appalled by Mrs Banks tying her sash to Jane and Michael’s kite at the end. Having read the first of her books, in the name of research, however and having found not one mention of the word ‘suffragette’ I’m sceptical about just how factual these reports are. She definitely felt that Julie Andrews was a deeply diluted version of her haughty, dismissive creation but whether or not she truly felt that the cause of feminism had been set back by the creative license Disney took with her work remains unclear. Are these online crusaders genuine feminine freedom fighters with valid points and questions or uber-paranoid internet junkies bent on the downfall of large corporations? I’ll leave it to you, dear reader, to decide. But before you do please note: just because you’re paranoid doesn’t mean they’re not out to get you.

← True Romance Isn’t Dead: Lessons in Love in 2010
Cranes and boats and trains: my day at the Docklands →