Black Friday 100 years on: My stint as a Suffragette 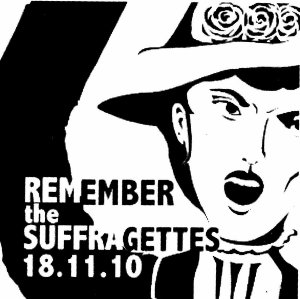 Yesterday was my birthday and although I was spoilt rotten by those around me I spent a great portion of the evening doing the exact opposite of celebrating: commemorating. My birthday coincides with one of the largest scandals in the history of women’s rights: Black Friday and yesterday marked 100 years since Black Friday originally occured. I attended a vigil at Westminster to remember the women who had fought, all that time ago, for the rights that I enjoy today. The evening started with a reading. Accounts were read out from women who survived their ordeal on Black Friday and those accounts, I cannot deny, moved me to tears.
I knew that women had died for the cause of Suffrage but, if I’m completely honest, I had no idea about the barbaric degradation they were put through before they were even so much as arrested at protests. The accounts included details about how women were beaten and batoned by the police. How they were kicked and punched and thrown beneath the cold and uncaring glare of Parliament.
Even more distressing were the reports of the sexual abuse the women endured that day. Their skirts were lifted up by crowds of men, their breasts were grabbed and pinched and one woman recollected how a policeman threw her into a large group of men and told them to use her as they wished. This went on for hours. Rather than make arrests the police chose to belittle these women in every possible way they could think of.
The government considered the day a disaster and it was particularly embarrassing for Winston Churchill who was Home Secretary at the time. It was suggested last night that they tried to squash newspaper reports and ordered certain titles to destroy the negatives of any photographs they had taken. In my opinion, if they really thought that they were doing the right thing they wouldn’t have been so quick to conceal what they had done but that said I have not read any literature myself that directly confirms this accusation. Winston Churchill did however later deny an inquest into the events of Black Friday. It may have made him unpopular with women at the time but he clearly didn’t want the results of such an inquest reaching the cold light of day. 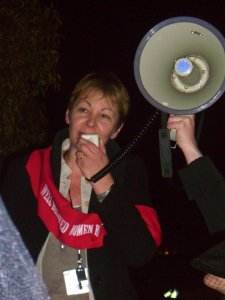 After the reading was over Green Party MP Caroline Lucas, the first MP the Green Party have ever had, then spoke to the crowds about the importance of fighting for the things you believe in. She cited a Climate Change meeting that had taken place just that day where only 8 MPs had been present. She went on to commend the Suffragettes for their resilience, their service to women and to the shaping of Britain. She gave an honourable mention to Emily Davison who not only died for the cause but, at one time, locked herself in the crypt at Westminster simply so that when she was arrested she could give her address as “the Crypt of Westminster Hall since Saturday.” Caroline implored the people present to take up Emily’s charge; to keep on pushing Parliament to make the changes they wanted to see in the country.

Following Caroline’s speech we marched around Parliament holding candles and banners in vigil. We shouted long and hard at the parliamentry gates that we wanted “Deeds Not Words.” Helen Pankhurst (great granddaughter to Emmeline, granddaughter to Sylvia) spoke about the plight of her ancestors and laid a wreath on the memorial to Sylvia that stands just outside the Houses of Parliament. At least, she tried to. The police had locked the gates and consequently we had no choice but to climb over the gate to lay the wreath. Funnily enough a bit of metal wasn’t going to get in the way of us commemorating somebody who had changed the lives of generations.
Standing there next to Sylvia’s memorial I thought about all the women who’d endured beatings, abuse and even death – for me. Most of us know the Pankhursts – they are the big names in Suffrage but there are a few other names (and many more that I don’t know and probably never will) that are worth mentioning. Those names are Nancy Astor, Mary Clarke, Catherine Booth, Josephine Butler, Flora Drummond, Elizabeth Fry and Emily Davidson. After my experiences at Westminster last night I’m always going to remember their sacrifice and I hope after reading this, rather small, tribute that you will remember it always too.

← My Notes on Berlin
Postcards from Byland Abbey →