In Interview: Gemma Seltzer on 5am London 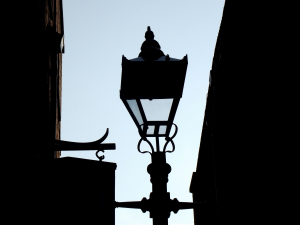 A while ago on Twitter I stumbled across the work of Ms Gemma Seltzer who was involved with a project called 5am London. It was a year-long fictional photoblog that charted the city in the early hours of the day, a collaborative effort between photographer Mathew Hanratty and Gemma who is a writer. The posts and the stories were so convincing and involving that initially I had no idea they were of a fictitious nature. The quality of the project inspired me to interview Gemma and let everyone know about it. It is a beautiful example of how independent, creative people can use the reality of the city for their own fictitious ends.

The interview Gemma kindly granted me is pasted below.

What was it about the original text that made you act on it?

That was part of the story, actually! 5am London was an entirely imagined narrative, from the text message to the detail in each blog post. Only the photographs depict the reality of each late night wander, as the story instalments use the experience as a starting point but are a fictionalised version of events.

The idea for the text was influenced by French conceptual artist Sophie Calle, who investigates human behaviour in her work. She’s played the part of a private investigator and a scientist to test and understand other people. Living a fantasy life as a woman wandering the streets at 5am in London, was our way of exploring similar ideas.

I anticipated 5am to be a sad time, expecting to see sunken faces and debris strewn on pavements. In fact, the buses were lively with laughter from those on their way to work or holiday, and those returning home. We found that the city was still active, even at that time of the day.

What happens in 5am London that 11am Londoners may never see?

Our blog offered us a way to explore another side of the city, and we expected the early morning to be quiet and still. But at 5am, London seems not so different from 11am! The streets are calmer, of course, but the buses are running, the taxis driving, and the cyclists negotiating the roads. People are rushing to their destinations, with suitcases or briefcases often. The occasional fox will dash by. In the summer, the differences are as subtle as the light that lifts suddenly at sunrise. The change is almost imperceptible; you could believe it was the middle of the day. During winter, when the darkness is so heavy, it’s a different story!

Mathew’s photos of our experience were posted online alongside my semi-fictional blog posts. We developed the project together, but approached the concept from different angles. He was capturing images directly from life, my text used the scene as the starting point but was a fictionalised version of events. I don’t think either of us would label ourselves at psychogeographers – we are just very interested in how city landscapes can be shown through their inhabitants. Our work is ‘of the moment.’ We capture fleeting scenes before they drift away, trying to pin down specific moments while understanding that we can only ever remain in the present.

Are you native to London? What’s your relationship with the city?

Yes, I was born in north London but I grew up in Bedfordshire. I’ve always been drawn to the energy and fizz of cities, fascinated by urban landscapes and the effect on the people who live amongst the high buildings and busy streets.

I spent a few days writing in a lookout tower recently and it took some time to realise why I wasn’t writing fluidly, and felt without stimulus. The simple answer was, I couldn’t see any people! I was exploring the self and the location, yet soon realised I needed to have a sense of time passing to act as a background to writing and, for me, that is people moving and talking and walking forward.

As part of this project, we saw famous London landmarks such as the Houses of Parliament, Battersea Power Station and the London Eye at 5am. It was a privilege to have the opportunity to witness such icons with the early morning light casting strange shadows. It was a chance to see the buildings afresh and renew our love of the city.

Where’s your favourite part of the city at sunrise?

Despite London being so busy at all hours, we still attempted to find still moments. Our final excursion was to Hyde Park in March, was incredible. We took a single night bus to the edge of the park and took a journey through the darkness towards the Serpentine. There were few streetlamps, little traffic, and no other people at all. Birds started to sing, and the sky shifted from black, to indigo to a gloomy blue. We walked in silence until we saw the water reflecting in the moonlight. It was stunning.

If you haven’t already I really recommend checking out 5amLondon.