This is my Teesside: ‘5 Reasons to Up The Boro!’ 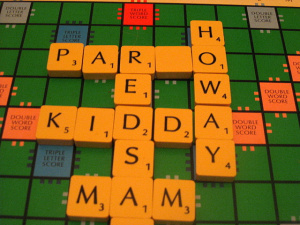 The majority of people I know view the smoky haze of Middlesbrough with deep disdain. Probably because these days the majority of people I meet are Southerners. They diss Middlesbrough based on whatever snippets they’ve gleaned from the national news over the years but most of them have never been there. Consequently I’m kind of confused about why they feel they are entitled to an opinion on the subject. This down-at-heel, ready-to-peel working class town has a very special place in my heart. It’s not just because my parents come from there or the fact that I enjoyed three drunkenly productive years there at the University of Teesside. There are just so many things about being in the Boro that are homely, quirkly and truly individual (my three favourite qualities in pretty much anything life has to offer). Need proof? Here are my top 5 reasons to ‘Up the Boro!’

Reason Number 1: Dialect. When I go back up north there are few things I love better than sitting in a cafe, listening to the words I never hear said in London. Older family members refer to their younger counterparts as ‘kidda,’ they order their bacon sandwich with red sauce, never ketchup, and when it’s time to leave they say “howay then.’ It may be a little bit over the heads of anybody South of York but to me it’s a comforting reminder that I’m home.

Reason Number 2: Inspirational Industry. I have to admit that there is something about old factories and tall-standing chimneys that is sadly poetic to me. Maybe it’s a result of being raised in the ‘gritty North East’ but even if this is a bit weird I can take heart in the fact that I’m not alone. Ridley Scott, a fellow North Easterner, looked upon the smoke-stacked skyline of Teesside on his route back from Redcar one night and imagined it as a strange, futuristic world that later became the backdrop for his film ‘Blade Runner.’ Claims to fame don’t come much cooler than that.

Reason Number 3: Abstract Cuisine. Southerners like their pesto and their parmesan shavings but we Northerners find this all a bit orthodox. We’d much rather rock up to a take-away and order ourselves a Chicken Parmesan or a ‘Parmo’ as it is locally known: a rather inspired combination of breadcrumbed chicken topped with a thickened Bechamel sauce with a side order of chips. And whilst we’re on the subject of chips you have no idea what a relief it is to be able to order chips and gravy up there without inducing a vacant glare from the counter staff. Chips and gravy seems to have bypassed Southerners who, startlingly, seem to prefer curry sauce (ew!). It’s fair to say we do not have the most linear of culinary tastes (scream if you love crisp sandwiches) but conventional cuisine just isn’t as much fun.

Reason Number 4: The Transporter Bridge. Bridges fascinate me as architectural structures but I know of few others in the world that are as 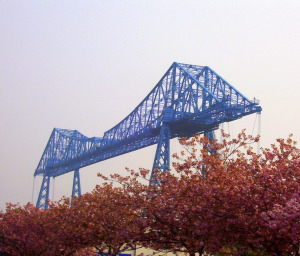 pleasing to my eyes as The Tees Transporter. This little geometric beauty was officially opened in 1911 and has ever since been emblematic of Teesside identity. The old girl’s had a few knocks over the years, including the numerous bombings of World War Two, but like the hardiest of Middlesbrough folk she’s taken it all on her steely chin and still stands proud in her blue shroud for drunken student and down-and-out-dole-boy alike to marvel at. Isn’t she a doll?

Reason Number 5: Arts and Culture. Yes I know. Not particularly the first two words that spring to mind when you say the name ‘Middlesbrough’ but times they are a changing with the introduction of MIMA (Middlesbrough Institute of Modern Art). In addition to housing collections by some of the most revered modern artists MIMA arrange regular film screenings, offer life drawing classes and host an adorable Valentine’s event called ‘Love Match’ which  I’m more than a little bit gutted I won’t make it to. In short: The Tate Modern and the BFI better watch out. Looks like they’ve got competition.

← My Adventures in China Town, NY
Come Hither Cartoons: My search for the sexiest sketch →