Come Hither Cartoons: My search for the sexiest sketch

Recently I caught the tail-end (no pun intended) of “Who Framed Roger Rabbit” -the film that secured all of those stunning BT adverts for Bob Hoskins. I’d forgotten just how much of a genius Christopher Lloyd is when it comes to comic acting and I was also reminded about why Jessica Rabbit is such a sex symbol for the men of my generation. If you’re willing to get over the fact that she’s a cartoon, it’s easy to see why she is considered by some as the perfect woman: that long mane of red hair, a criminally curvaceous figure and the voice of a super-vixen which, for the record, actually belonged to quick-tongued actress Kathleen Turner…who could resist?

She’s sultry enough to make your eyes pop out of your head in true toon style and the real bonus with our Jess of course is just because she’s drop dead gorgeous doesn’t mean that she’s out of your league. She makes it clear that the reason she fell so deeply in love with her “Honey Bunny” is his ability to make her laugh (the fact that he’s a rabbit and therefore probably a bit of a goer, of course, has nothing to do with it). What the big film execs are saying here lads is that sun tans and six packs are for shmucks; as long as you’ve got a stunning personality you could still end up with the likes of Jessica…which doesn’t at all sound like the fantasy of some lonely backroom writer who is ugly as sin.

Seeing Mrs Rabbit strutting around in that infamous dress that, just about, covers what it needs to got me thinking about other cartoon characters who have adopted the sex factor over the years. I’ve heard Tinkerbelle mentioned by a few of my friends. Granted, she’s not much of a talker but she does have a mischievous streak and thus tends to appeal to those in the market for a fiesty blonde. Daphne Blake from Scooby Doo (who I always thought was a bit of a benign character but, hey, I’m not a hot-blooded male) and The Little Mermaid are also on most men’s animated wish list. Elastigirl from The Incredibles has also been discussed as a possibility. Initially I was somewhat stumped by this as she’s quite a motherly character, then it occurred to me that her unique stretching abilities probably do have their advantages in the bedroom. I’d really rather not comment, however, on what those advantages might be. 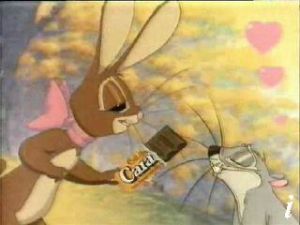 is the Cadbury’s Caramel Bunny from the well-remembered advert. I suppose the whole concept is a bit of a tip of the hat to all those people who found Bugs Bunny attractive when he masqueraded as a woman in Looney Toons (you know who you are). I know that, unlike Jessica, she’s a rabbit in the real sense of the word but she’s still a bit of a sassy lass. She’s got those long eyelashes that bat continuously to get Mr Beaver’s attention and her sugary, seductive voice probably provided the British male population with more melting moments than the chocolate itself. Other perks include her having a seemingly endless supply of chocolate to dole out whenever she feels like it and her persistence that everyone must “Take it Easy.” Those are three words that I’ll bet most blokes would like to hear their girlfriend say more often.

Just think about it: your days of trouble and toil would be over. She’d say things like “Take it easy, I’ll cook tea so you can watch the football.” And “Of course you can play on your X-Box for the next eight hours. Take it Easy.” And you’d probably also hear: “Have some chocolate! It will make you feel good about life and I’ve got an endless supply from all those ads I did anyway” quite a lot too. Bunking up with the bunny isn’t sounding too shabby now is it? I can’t be the only one to see this. What do you think? Is she a fox or just a mere rabbit afterall?

← This is my Teesside: ‘5 Reasons to Up The Boro!’
Confessions of a Hootaholic: All the better to tweet you with →

One thought on “Come Hither Cartoons: My search for the sexiest sketch”